From time to time in your gun buying travels, it’s likely that you’ll come across a pistol that looks like an old Beretta 92 (or M9 depending on if you have served with Uncle Sam) but on further inspection is nothing of the sort.

A single-stack magazine pistol with a funny release and oddball markings, this gun still bears an uncanny resemblance to the more common double-stack 92 of today.  So what’s the story? Well my boy, meet the Beretta M51, its clones, and its offspring.

WHERE DID IT COME FROM?

Developed in the late 1940s by the Italian military to replace the old .32 and .380 caliber Beretta pistols used during World War 2, the Modello 1951 was the company’s most successful handgun until the 1970s.

It brought a number of improvements to the table and evolved during its design phase from a typically understated European pistol to one whose features stand side by side with the best combat pistols of today. 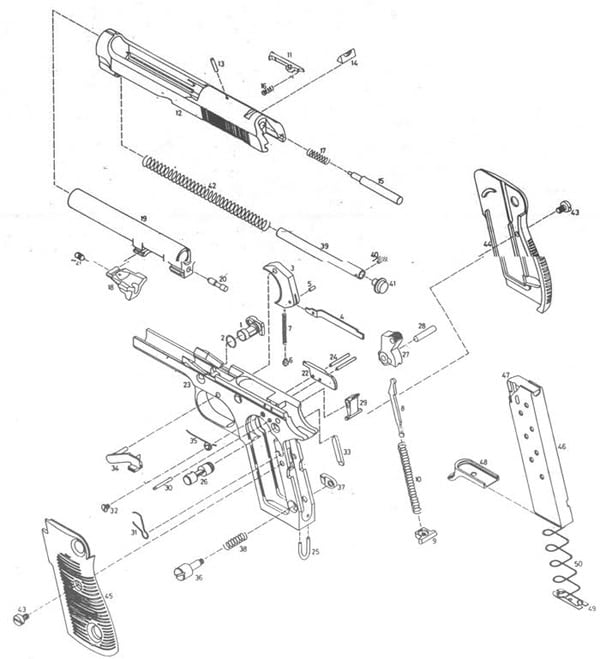 When first introduced, the gun was an alloy-framed handgun that used a steel slide and internals. Like most European-made guns, it was initially designed with a heel-release magazine catch. The heel catch is awkward to use one-handed and can slow down magazine changes.

During R&D Beretta gathered feedback from the Italian military and moved the magazine release to the grip, went all steel instead of alloy, and designed the lengthened slide to allow a huge ejection port for increased performance.

This gun used a short recoil action with a breech locking mechanism (the first for Beretta who had previously always used blowback actions). With a 4.5-inch barrel and overall length of 8-inches, it had a 31-ounce unloaded weight. Firing from a single-stack magazine that gave it an 8+1 capacity. Previous pre-1950 Berettas like the M1923 and M1931 look downright blocky compared to the graceful lines and sleek profile of the M51. 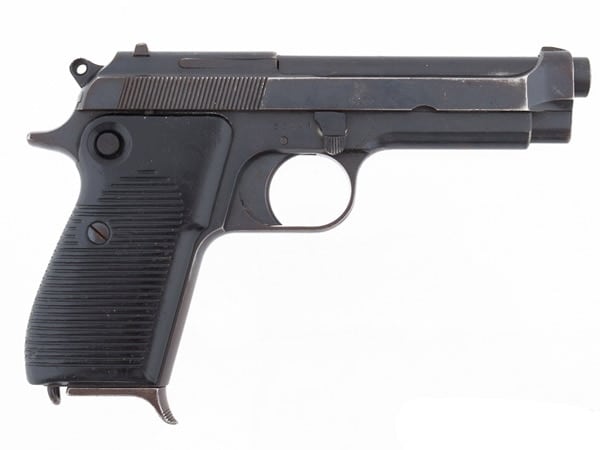 Feature wise, the M51 became the basic platform for later guns such as the current M92. It proved to be a solid performer with good accuracy, reliability, and a simple manipulation and cleaning operation. 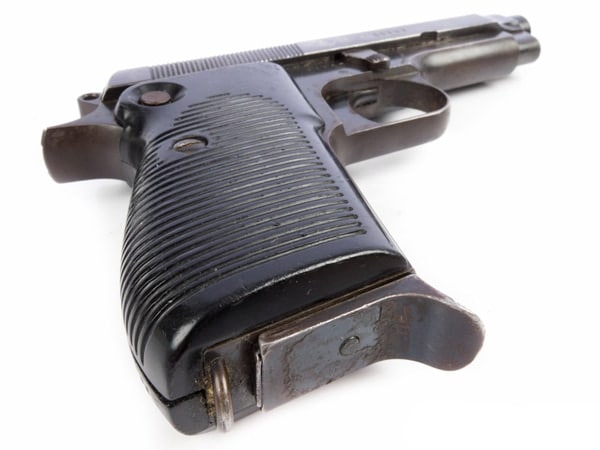 USE AND KNOCK OFFS

Beretta had a case of marketing indecisiveness with these guns and over their thirty year production sold them interchangeably as the Brigadier, the Model 1951 (the year of introduction), Model 951, Model 51, and Model 104. No matter what you called it, the gun was a best seller and was adopted by not only the Italian military but by Israel, Nigeria, Haiti, Iraq, and Egypt. They were only replaced in Italian service by the M92 in the 1970s.

The Egyptians liked their M1951s so much that Maadi, a local firearms concern known for its AK-47 style rifles among other designs, began production of the gun under license. Known as the Helwan Brigadier, Maadi Cadet, Model 951 and others, these mostly Egyptian guns (they often used Italian parts) were sold abroad and many washed up here in the states pre-1994 for about $150. 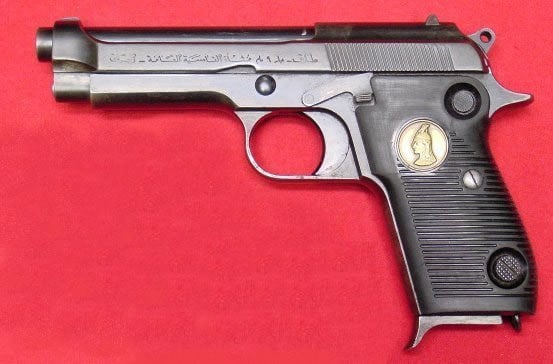 One of Saddam’s Berettas i.e. an Iraqi Tariq. Note the crest in the grip.

The Iraqi military and police took a page from the Egyptian book and licensed the design as the Tariq pistol. Made by Al-Qadisiyyah in great numbers, many Americans who have served in CENTCOM have encountered one of these ‘Saddam Berettas’. They are readily identifiable by the brass inlay of an Arab warrior in the grip and extensive Arabic markings.

As it’s frowned upon to bring these out of the country by servicemen (soldier bring backs like your grandpa’s old Luger are officially a thing of the past), these Iraqi guns are rarely seen outside of Asia.

Off and on, some of the 50,000 early Italian made Egyptian M1951s are imported into the States and are C&R eligible. Captured by Israel in their series of wars between 1967-73 with their North African neighbor to the east, these guns are usually in very nice condition and can be had in the $300 range for working models with at least one magazine.

These will be marked “Beretta cal 9mm Mod 1951- Patent Gardone VT Italia” on the left hand of the slide and will have pebbled grips with the familiar Beretta three arrows logo. Mixed in with these will be a few M1951E models that have slightly shorter (by 1/8″) slides, giving the pistol an appearance of having a longer barrel.  These “E” models bring a slightly higher premium with collectors. 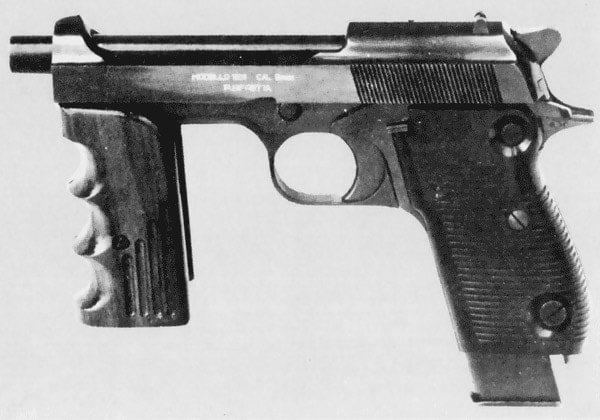 Beretta made the model for commercial sales as late as 1980 and these guns, without Egyptian markings, can go for up to $550 in excellent condition. These guns are generally not a C&R weapon and must go through a 01FFL. (Note, if you find one marked M1951R, the ‘R‘ stands for Raffica, or ‘burst’ in Italian.

It is a super rare select fire model with a 1000-rpm rate of fire and should be treated as such).

The Helwan Brigadier is another matter. These guns will not have the Beretta name or logo anywhere on it, although they were at one time a licensed product. They were brought into the US by Interarms, Navy Arms and others for almost decades.

Most of these Egyptian produced guns were made specifically for export sales abroad to bring hard cash into the country. As such, they were made in great quantities and for many years, which results in wildly varying quality control. Some Brigadiers are very nice and go bang every time you pull the trigger, while some others are less than perfect.

With that in mind, always pause if someone asks for more than $250 on one of these unless you are really sweet on the gun. As with any used gun whose history is unsure, have it checked by a gunsmith before firing and never rely on it until it has proven itself at the range. 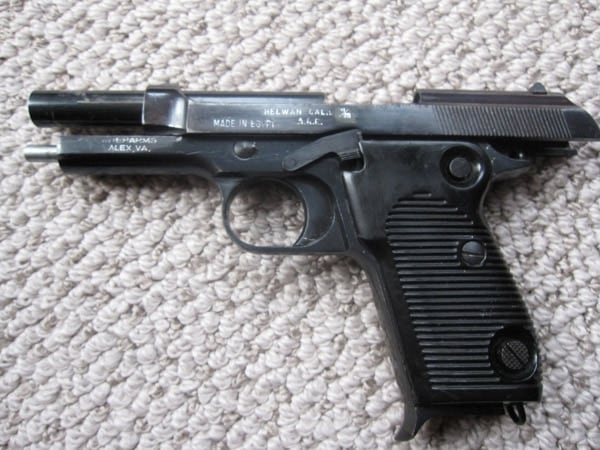 Bottom line, collect a Beretta M51, shoot a Helwan if it’s nice, and in either case, don’t spend too much money on them (unless it’s a transferable Raffica for cheap, in which your first step is to drop me a line as soon as possible).