The Ruger Max-9 micro-compact pistol is a major player in the field with its maximum 9mm ammo capacity and minimal footprint. Here’s a full review.

Ruger has its finger on the pulse of the firearms market, so it’s no surprise that the company has launched a brand-new micro-compact, optics-ready 9mm carry pistol. With SIG’s P365 and Springfield’s Hellcat selling in record numbers, Ruger wanted a piece of the action and designed its own competing micro 9mm that offers a capacity of 10-plus rounds yet carries like a single-stack pistol. It’s called the Max-9.

The Max-9 offers many of the same features you’ll find on other subcompact optics-ready models like an increased magazine capacity (12+1) and a slide that’s pre-cut to accept a wide array of popular JPoint- and Shield-pattern micro reflex sights—a list that includes not only those red dot models but also a variety of others from Crimson Trace, SIG, Springfield, Sightmark and more.

Everyday carry is rough on a handgun, but the Max-9 is built to withstand that abuse. Both the cold-hammer-forged 3.2-inch barrel and hardened alloy steel slide feature a black oxide finish that stands up to friction and the corrosive effects of perspiration. The Max-9 features a one-piece machined anodized aluminum fire-control chassis.

The glass-filled nylon frame is light yet tough, and it’s newly designed to accommodate the new magazine. The grip comes with micro texturing that provides a firm hold, which is always beneficial on a small, light 9mm firing hot defensive loads.

The grip angle is steep with a deep undercut beneath the slide to provide a consistent, high grip, and the trigger guard is also undercut for improved control when firing. The Max-9’s grip geometry results in less muzzle flip and faster follow-up shots.

And the Ruger is indeed light. Empty weight is 18.4 ounces without optic, and even with a full magazine, the Max-9 weighs around 25 ounces. The Ruger’s minimal mass along with its small dimensions—it measures just 6 inches long and 4.5 inches high, and the slide is under an inch wide—make it easy to conceal. 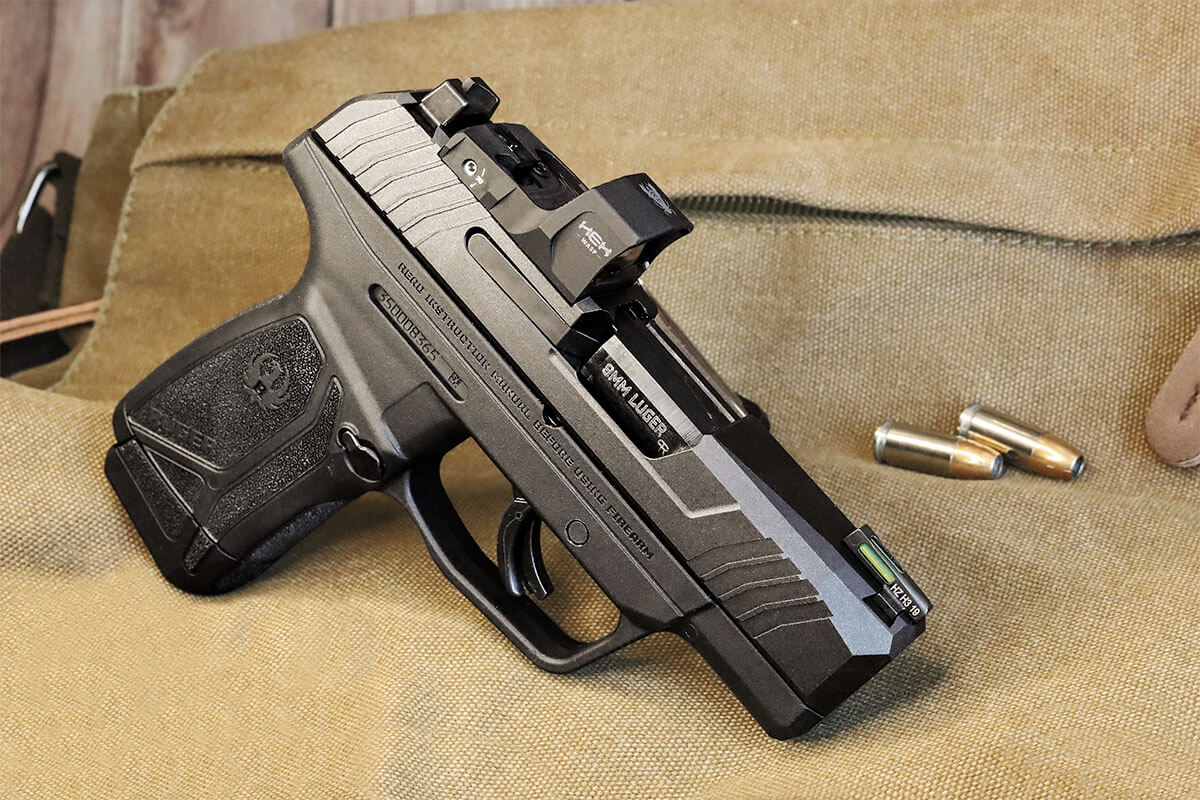 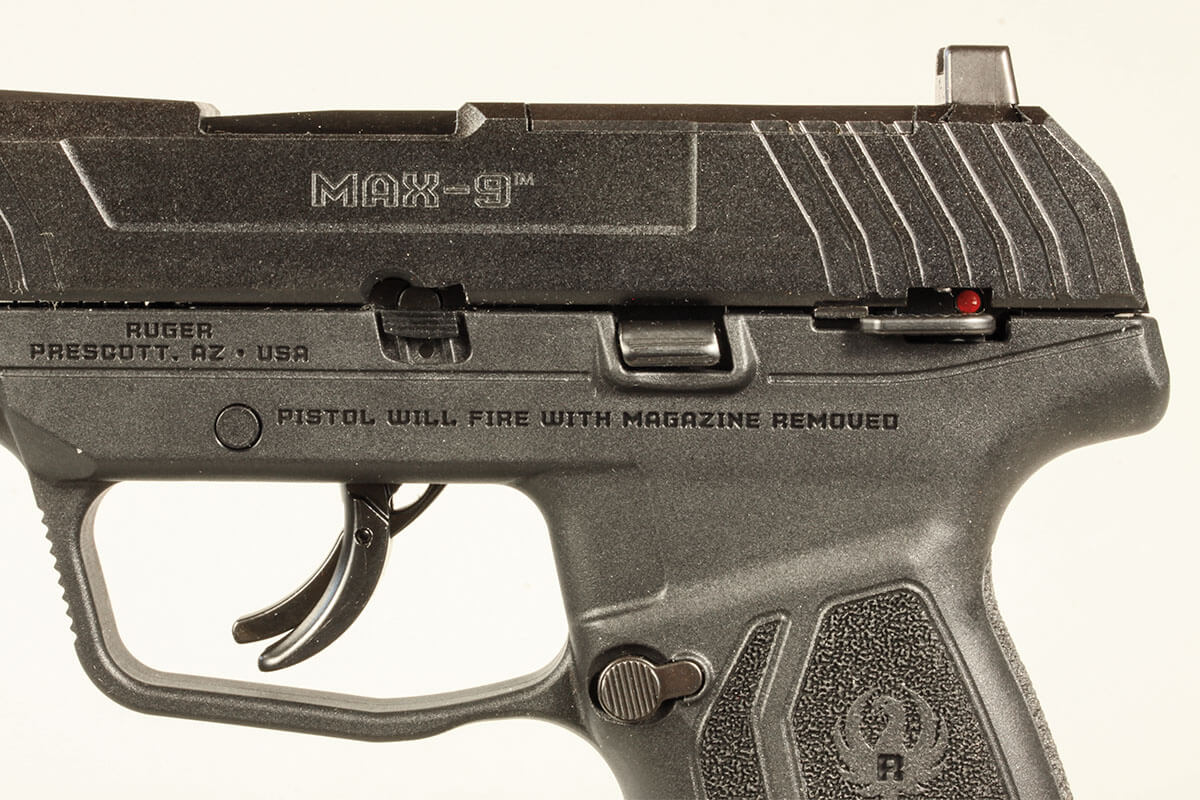 It’s almost identical in size and weight to the Springfield Hellcat RDP and slightly longer and taller but narrower than the SIG P365 Nitron. All three guns weigh within an ounce when unloaded. The Ruger is just 0.95-inch wide, which makes it narrower than the Hellcat or the P365 and exactly the same width as the single-stack Smith & Wesson M&P Shield M2.0.

Some gun companies don’t put a lot of thought into the sights that go on their optics-ready pistols, likely because you’re probably going to be using a red dot as your primary sight, but the Ruger has solid, functional irons. They comprise a drift-adjustable black notch rear sight that is dovetailed into the alloy steel slide and a tritium/fiber-optic front sight. 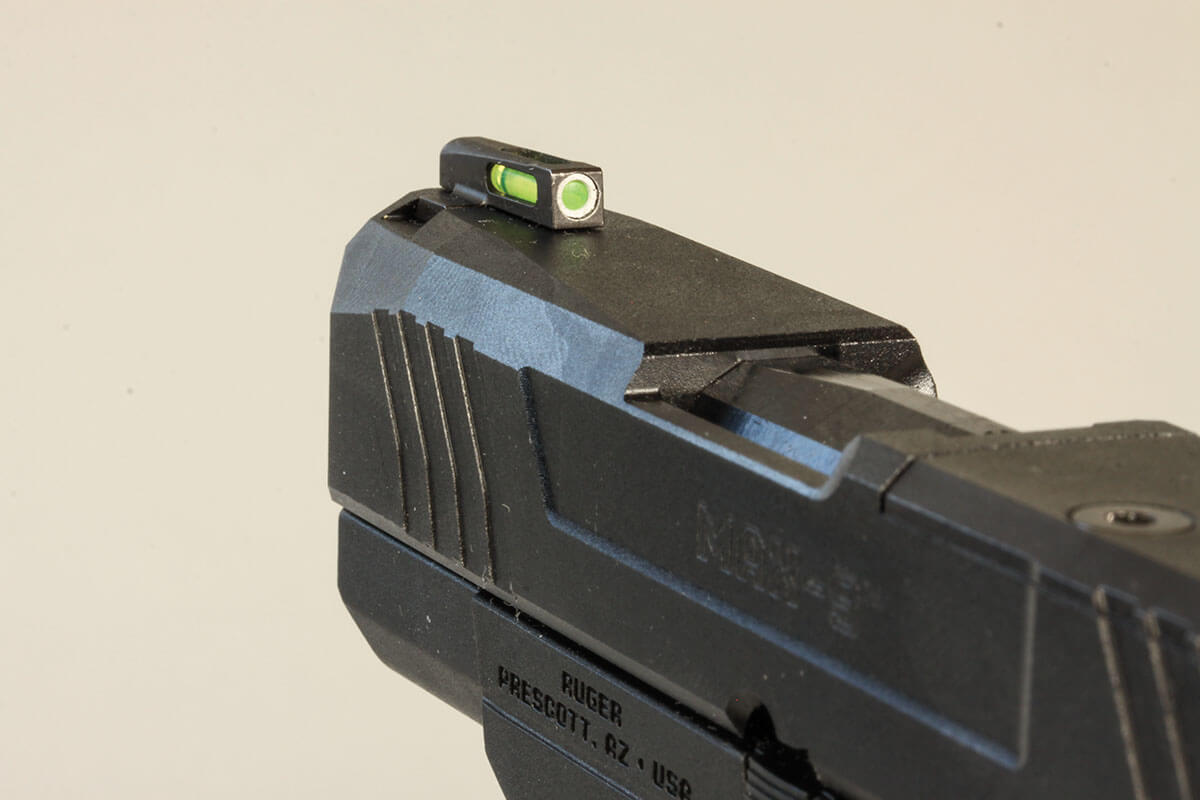 The rear sight has a slight cutout around the rear notch that cuts glare, and the front sight, with its bright green center dot and white perimeter ring, is bold enough to be easily seen at any time of the day. The rear sight is tall enough that it can co-witness with your optic, and the muzzle portion of the slide has a machined bump that slightly elevates the front sight so it aligns properly with the rear sight. The rear sight has a tactical ledge that makes it possible to rack the slide with a single hand if there isn’t a reflex sight installed.

The Max-9 features beveling on the slide corners that makes it easier to conceal this pistol under light clothing. Nothing shouts, “Look, a gun!” more loudly than sharp slide edges bulging from beneath your shirt. The beveling also serves to reduce the gun’s overall weight a bit.

The rear of the slide is rounded like the Security-9, and that shape further reduces the likelihood that your firearm will show through clothing. Angled front and rear slide serrations offer solid control over the pistol when manipulating the slide or performing press checks.

There’s a long-fought war over whether a manual safety belongs on a carry gun. Ruger did the smart thing by offering customers on both sides of the safety/no safety argument a pistol that suits them.

Max-9 models come with several passive safeties in place, though. The Max-9’s trigger comes with an integral safety, and there’s also an internal striker block safety as well. There is no magazine disconnect, so the gun will fire even without a magazine in place.

A viewing port machined into the top rear portion of the chamber allows the shooter to see a loaded round. There’s not a left-handed model available, but the magazine release is reversible.

Fieldstripping requires removing the magazine from an unloaded firearm, pressing down on a pin stop on the left side of the receiver with a non-marring tool, pulling the trigger, retracting the slide enough to align the cutout in the slide with the pin, and pressing the transverse takedown pin through the frame from right to left. It sounds exhausting, but it’s not terrible once you’ve done it a couple of times.

Ruger was wise enough to offer a full line of accessories for the Max-9 handguns at the same time the gun went on sale. Because the slide is designed to accommodate a wide array of existing reflex sights, it’s easy to add an optic to the gun, and Ruger sells the Max-9-compatible Sightmark Mini-Shot A-Spec M3 red dot and the Crimson Trace CT1550 through its website.

There are also several dozen different holster and magazine pouch options available on the site. No one wants to wait a year or more for accessories for their new gun, and as long as Ruger manages to keep up with demand you’ll be able to purchase all of your accessories the same day you order your firearm.

Those who hate reading instruction manuals will find the Max-9 easy to operate thanks to the video library on Ruger’s website. The videos cover disassembly/reassembly, optics mounting, and cleaning the pistol and the magazine. They’re presented in such a way that even brand-new gun owners can follow along without getting overwhelmed by jargon.

The Max-9 offers everything that the next generation of concealed carry permit holders want—compact size, light weight, double-digit capacity, and a slide cut for optics—at a suggested retail price under $500. Based on the interest in optics-ready carry pistols and the Max-9 in particular, I anticipate they’ll disappear from shelves just about as fast as they arrive.

It’s easy to see why micro-compact red dot pistols are so popular after carrying the Max-9 for a few days. The trim, lightweight pistol fits tight against the hip when carried in an inside-the-waistband holster. With the 10-round magazine the Ruger vanishes against the body, but the 12-round extended magazine adds only about a quarter-inch to the gun’s height—and some valuable grip space, too—so I carried the Max-9 with the larger magazine. Even with the reflex optic it still manages to ride right alongside the body and disappear under light clothing.

Thanks to its grip angle and texturing it’s easy to get a fast, firm purchase on this pistol. The trigger is easy to reach for shooters with large and small hands. You’ll have to hang a pinky finger with the low-cap magazine, but even shooters with large hands will manage a full handhold on the gun when using the extended mag. The co-witness sights won’t hang up, and the controls are minimized so that they won’t snag during a draw.

The downside of minimized controls is less surface area. The magazine button on the Max-9 is easy to access, but the slide stop is rather small. It won’t hang up or dig into your flesh when carrying, but it’s not as easy to access as larger slide stops on larger guns.

Designing a micro pistol is about balancing small gun portability with big gun practicality, and Ruger did a commendable job with this pistol for the most part. When it’s time for a mag change, though, I suggest the overhand pull-the-slide-and-drop method of getting back into battery rather than hunting for the slide stop.

The Max-9 offers one of the best triggers found in any micro compact pistol. Pull weight averaged five pounds, four ounces for 10 pulls on a Wheeler gauge, and the trigger is very predictable. There’s a long, light take-up, and trigger reset is very short: under a quarter of an inch.

Recoil from this 18-ounce 9mm is snappy, especially with hot self-defense loads, but there’s a noteworthy distinction between snappy and painful. The hand sits relatively high on the gun and the grip design and texturing perform well. Recoil from this gun is equal to or even lighter than other competing micro 9mms, excepting the compensator-equipped Springfield Hellcat RDP. The slide is not as easy to operate as the Smith & Wesson EZ but is on par with other micro compact optics-ready pistols in this class.

With a Springfield Hex Wasp optic, the Max-9 produced five-shot groups that averaged roughly two to three inches at 25 yards from the bench. Reliability was flawless throughout the test with zero failures through over a hundred rounds. Compact and subcompact pistols sometimes fail to lock open after the last shot, but that was never once an issue with the Max-9. There was only one glitch throughout the entire test, and that occurred when my thumb accidentally engaged the manual safety.

The Max-9’s side-mounted extractor is beefy and takes a substantial bite on the rim of the case, and I particularly like the nickel Teflon magazines, which Ruger has cleverly engineered to look like a bottleneck rifle cartridge case when viewed from the rear and is Ruger’s answer to the double-stack/subcompact mag designs of SIG and Springfield.

After completing the accuracy/velocity testing, I left the bench and began running standard pistol drills. So long as your hand is high on the gun, you can run drills in a hurry and deliver fast subsequent shots, but if your hand rides a bit too low, you’ll lose both speed and accuracy since the gun will be harder to manage. During a Mozambique Drill I pulled the gun from the holster awkwardly with a low grip, and muzzle flip was noticeably accentuated.

Overall, though, the Ruger is quite easy to handle and combines an outstanding trigger with functional sights. I know the 10-round magazine offers ever-so-slightly better concealability and that some jurisdictions limit mag capacity, but I relied almost exclusively on the 12-round mag, and if I purchased this gun, I’d buy a couple of spare 12-rounders for the added grip surface and extra firepower and ditch the 10-rounder. The black oxide finish held up well, but for everyday carry I’d prefer a black nitride finish for added metal hardening and durability.

Ruger understands that its customers want reliable, affordable American-made pistols that stack up well against more expensive competition, and that’s precisely what you’ll get from the Max-9. It’s hard to find fault with the Max-9 because Ruger has been a leader in the concealed-carry market for decades, and this gun represents an evolutionary step forward for the brand. This affordable, dependable semiauto is prepared to take on the competition and gives up very little on guns costing considerably more.